The TDE Weblate is our own instance of Weblate designed to manage TDE translations. It is tightly integrated with TDE Gitea Workspace (TGW). It provides: 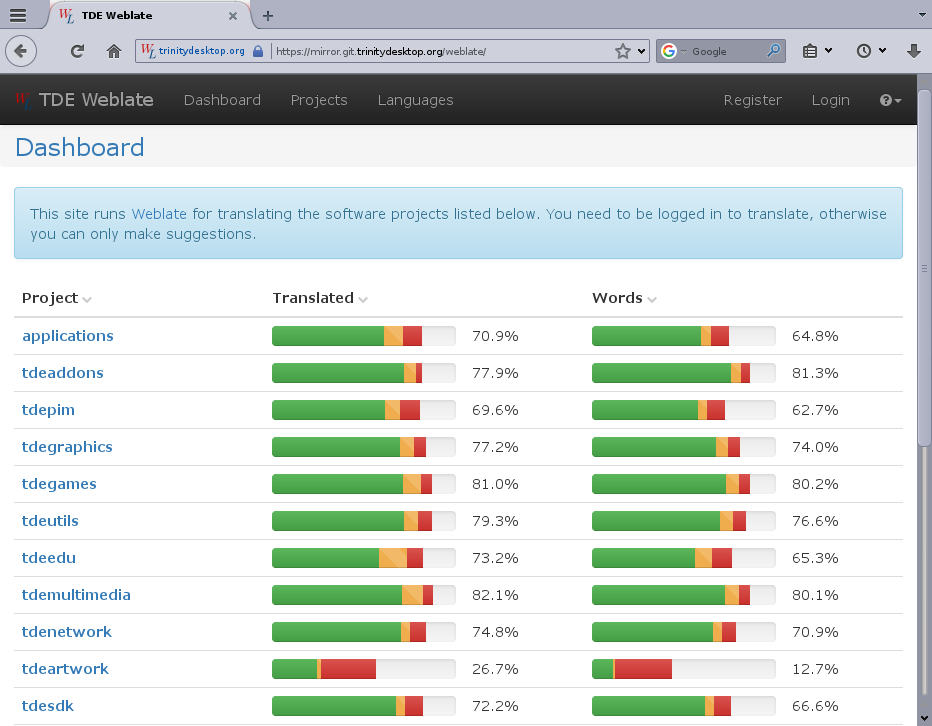 TDE Weblate manages its own clone of repositories, but is very tightly integrated with TGW.

During work on translations, individual translated strings are not immediately pushed into TGW. In order for translators to have enough time to work and also to check their translations, while avoiding too many small commits to TGW, pushing translations into TGW takes place after one day delay.

Therefore translators do not need to work directly with GIT repositories.

Each individual translation template in GIT is as an individual component in TDE Weblate. For better orientation, the components are grouped into projects – such as tdelibs, tdebase,… All applications are as components of project applications. Component names were chosen so that translators could reliably determine to which program and part the translation belong.

To work properly with TDE Weblate you need to register and log in. This will allow you to work on translations, and your work will be pushed to the TGW with your name as author.

To register, use the Register button in the upper right corner of the TDE Weblate. After registration will be sent a confirmation email to activate your account. After confirming your account activation, you will set your password. In your profile settings, you can then choose the language of the TDE Weblate interface and the languages you want to contribute to their translations.

Although TDE Weblate allows to work as an unregistered user, it's not a good idea. In such a case, it is not possible to work on translations, but only to make suggestions. But we do not have enough translators for each language to review and approve the proposals. Suggestions are not forbidden, but we recommend not using it. Instead, it is good to consider registering.