Gitea is, as described on their official website, a "painless self-hosted Git service".

It provides a free, self-hosted and easy way to maintain and share GIT repositories and facilitate collaboration among several contributors, providing a workflow similar to that offerred by other websites such as GitHub, GitLab and many others.

The official TDE source code is stored on the main Trinity Desktop servers and is available both through Git or web interface. External mirrors also provide access to the source code.
None of these methods allows users to easily propose software changes or bug fixes, having to email patches to one of the TDE core developers or uploading code to the TDE bugzilla in order to do that.

The TDE Gitea Workspace (TGW) is a copy of the official source code repositories that is synchronized with the main server on a hourly basis. It offers wider bandwidth and a collaboration workflow that helps achieving the aim of providing:

TGW serves the needs of the following groups: 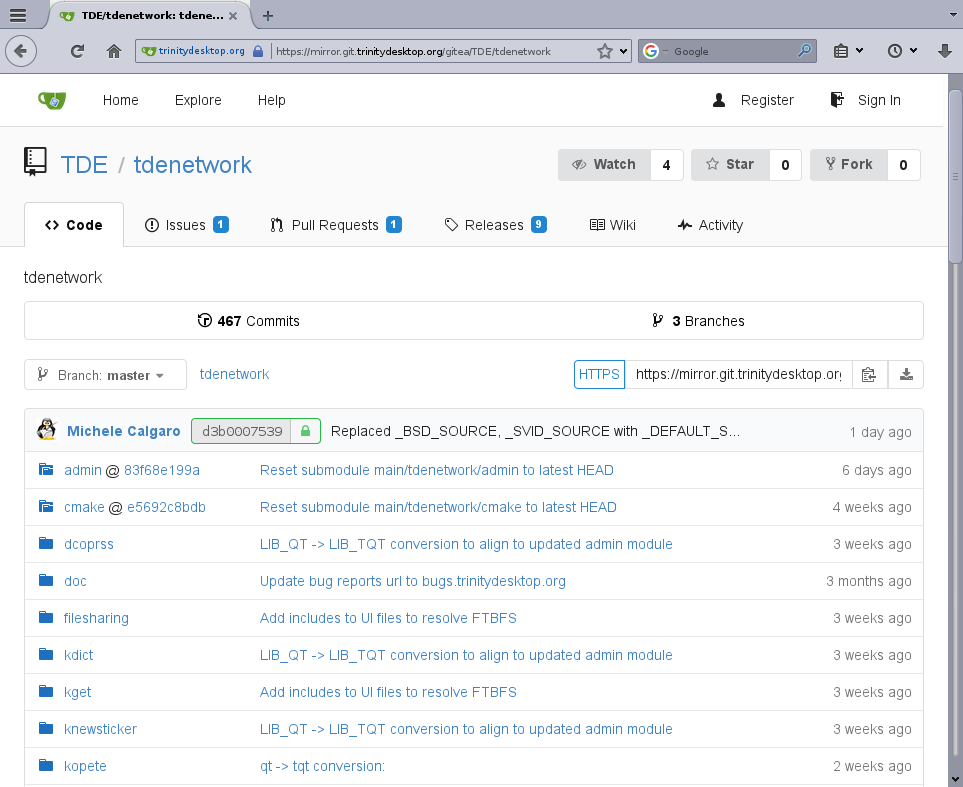 TGW has been setup as a set of git repositories which constantly mirror the contents of the main TDE git server, with synchronization performed automatically each hour. The bandwidth of the server hosting gitea is bigger than that of the main server, therefore it will serve users in a faster way.
In addition to hosting the TDE source code, each repository offers additional features to help reporting issues, suggest improvements, tracking milestones and contribute code changes in an easy and integrated way.
The main branches of each repository (master, r14.0.x, v3.5.13-sru) are protected against inhaverted changes and only the core TDE developers can commit changes to those branches. Nevertheless any registered contributor can freely propose code patches and changes for review and inclusion into the main server using the mechanism of pull requests, which makes collaboration and code sharing extremely easy and fast.

You can access TGW in read only mode as an unregistered user. This allows you to clone the TDE source code and keep up to date with the latest commits on a regular basis.
Follow the instructions below to clone the complete set of repositories or just a specific module.

To report bugs and suggest enhancements

In order to report issues and suggest improvements, you need to be a registered user. Click on the Register button on the top right corner of the main webpage to access the registration page. Once you have successfully created an account and logged in, you can start reporting bugs.

Please note that as a simple user, you will not be allowed to create your own repositories. Only contributors and TDE developers have access to such feature.

TGW is based on the shared collaboration with branches model. There is plenty of information on the internet regarding this, but in brief this is what you need to know:

Then each time you need to share more commits on the same branch, use:

As a TDE developer

In addition to being able to contribute code changes, as a core developer you will also have the ability to merge PRs prepared by other contributors. To become a core TDE developer you will first need to be a regular contributor for a while and the quality of your commits should be such that no major rework or corrections are required in most cases. You can then ask to be promoted to full time developer, should you wish to do so.

If there was any change, the commit hashes will have been modified and you will need to force-push the new commits to the remote PR branch.