This page is meant as a container of tips and tricks collected over time, addressing topics and issues brought up by TDE users.

Tips and tricks relevant to obtaining a well-functioning Trinity installation.

Upgrading from older versions or KDE3

If you are migrating from KDE3 or upgrading from TDE 3.5.x, you can reuse your own settings in TDE R14.0.x. When logging into R14.0.x for the first time, TDE will automatically execute a script which will migrate as many of your KDE3/TDE3.5.x settings as possible. At the end of the process, your KDE3/TDE3.5.x profile will still exist (unchanged) and a new TDE profile will have been created inside the ~/.trinity folder.

Note
Please refrain from renaming your .kde into .trinity before running R14.0.x. If you do so, the migration process will not take part and some applications may not run smoothly after that. See here for an example of problems that may arise if you rename your .kde folder manually.

Depending on your previous version of TDE, the file /etc/trinity/tdm/tdmrc may change from a script-generated file to a config file. It is advisable to accept the newer file if you are upgrading from an old version to TDE >= R14.0.0.

Tips and tricks for custom fine-tuning and configurations.

If you use sudo or a sudo-based distribution (such as Ubuntu), it is highly recommended that you install the tdesudo-trinity package as well. This allows to run programs that require root priviledge from the TDE menu using your own password. If tdesudo-trinity is not installed, you will be asked for the root password instead. More details can be found here.

Un-Bogging down an older system

Your system runs pretty well until Firefox, an office application, or some other application with high CPU usage demands too many cycles and your system then ‘freezes’ for seconds or minutes until the application gets finished.

A simple, but somewhat tedious, solution is to add nice to the launcher for each. Using LibreOffice as an example, add nice -n 2 before the command:

Generally anything ‘real-time’ you should leave alone (movies, games, editors).

Assigning a mouse click as part of a keyboard shortcut

There are multiple ways to accomplish this. The best arguably was the first method, which has been lost to time.

In these examples we are trying to achieve:

As the name says it’s been lost. What is remembered is that:

Step 2. Issue these command(s) as root or using sudo:

Note
xbindkeys does not like superfluous comments within its definitions. Leaving prior entries commented out within the config definition caused odd and inconsistent results.

Step 4. Issue these commands as yourself (not as root):

Step 5. To minimize any window:

Move the cursor over a window, hold down the Windows key and click the left mouse button.

Basically the same as xbindkeys + xdotool but replacing xdotool with either a dcop or gdbus command. This is probably less ‘buggy’ than xdotool, but unfortunately the writer doesn’t understand enough about either to make this work.

When an external device (e.g. USB flash drive) is plugged in, choosing "Open in New Window" in the TDE popup window will open the device under the system:/ path prefix. Image thumbnail display is not enabled per default for this location type in Konqueror. To enable image thumbnails for system:/ paths, adhere to the following:

Tips and tricks concerning the appearance of Trinity desktop and applications.

Adding a separator between windows button in the title bar

In the middle of the screen there is a list of available buttons. Drag a separator (--- spacer ---) on the title bar of the sample window, between the buttons where you want to space to appear.

Check the preview in the bottom part of the window and modify again as required.

Enlarging Kicker taskbar buttons to only occupy a single row

To achieve this, you have to add the following line into section [General] in your $TDEHOME/share/config/ktaskbarrc:

Select a MinimumButtonHeight that matches the pixel size of the Kicker panel as configured in Trinity Control Center >> Desktop >> Panels >> Arrangement (when the size is set to "Custom"). Restart the Kicker panel after changing the configuration line.

As an example, for a panel height of 38 pixels this adjustment can be done via Konsole (or another terminal emulator) in the following manner:

Hint: you may also additionally set MinimumButtonWidth in the same group to control how much minimum horizontal space (in pixels) a single taskbar button should occupy on its own.

You also have to restart Kicker for the change to take effect.

You can adjust the number to any icon size you see fit. You have to restart Kicker for the change to take effect.

Using a custom side image for classic K-Menu

The following only applies to the classic K-Menu enabled by setting "TDE menu style" to "Trinity Classic" in the "Menus" section of Trinity Control Center >> Desktop >> Panels.

Changes to the image files will only apply when the Kicker gets restarted. To trigger this, you can use dcop kicker kicker restart.

Using a custom image for the logout prompt

Hint: you may find the default image within $TDEDIR/share/apps/ksmserver/pics/.

Use another window manager with TDE

It is possible to use TDE with a different window manager than the one which comes by default. There are a lot of window managers out there, though, so TDE might not recognize their presence and thus not offer them as a choice in the Control Center. This is the case when you can use the advanced methods mentioned here to use TDE with another WM. 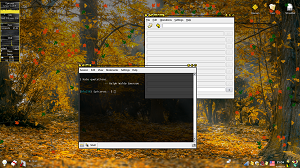 The easy way is, of course, to go to TDE Control Center >> Desktop >> Window decorations, switch to the Window Manager tab and then select your preferred window manager from the drop-down menu.

You can autostart Trinity and the components you need if your window manager supports autostart. In this case the window manager is started first. An .xinitrc file can also do the trick.

Make sure your window manager executes the first command (and any of the other ones for other desktop components you might want to use). For a more-or-less complete TDE session use all of them:

(* Trinity apps would do this anyway, but it's nice to have it ready for them.)

As for starting the WM itself, you can choose to use your window manager's session via your display manager.

Note that this is not considered a full TDE session and that your mileage may vary. For a better way of handling this see Method 2 below.

Method 3: using WM as part of a TDE session

Note
Due to a mistake, Trinity releases before R14.0.11 use the $TWIN variable instead.

To make this permanent:

Replace your_window_manager with the correct value. Save it and make it executable.

Then, create a .desktop file in /usr/share/xsessions, like this one:

Insert the values as needed. Save it and logout. From the sessions menu choose the session you just created. Login normally. TDE should start with the window manager of your choice.

Kmail Sanitize and Decrypt Mails shows an example on how to create a filter in kmail that removes unwanted headers and automaticly decrypts incomming mails.

A collection of snippets and useful scripts which can help in automating some tasks in TDE.

Lock session and turn off screen

This shell script locks the session and after 3 seconds turns the screen off:

For a ‘GUI’ you can add an Applet to your Panel that calls the shell script.

You can log out of the current TDE session and possibly shut down the system automatically (depending on your TDE configuration) using this command:

You can append three parameters ("confirm", "type", "mode") to determine the logout behaviour according to the following values:

This command will log out and halt the machine, killing any sessions and will never prompt the user: